Scroll to Top
Categorized as
3525
Tagged as
air pumpbabychildchildrendadeyebrowkidlettersnumbersomparentparentingphoenicsphrasesreadingspanishspellingstarbuckstalkingtoddlerwordswriting
Related 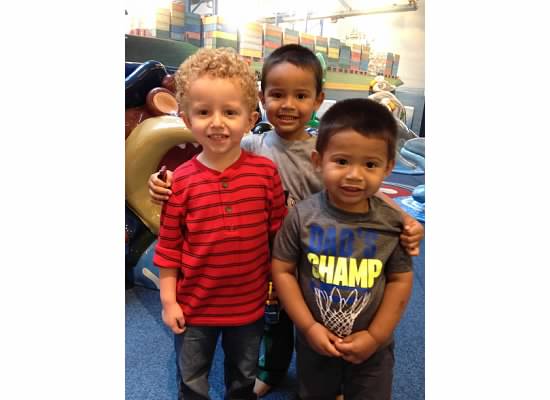 One of my favorite things about the toddler stage of development is language development. Here they are, these little sponges that have been listening to me yap and yap, talk up a storm with myself as I try to communicate with them…so when they finally start using words, figuring out meanings, pronunciations and even putting them in phrases and sentences, it’s an exciting time! 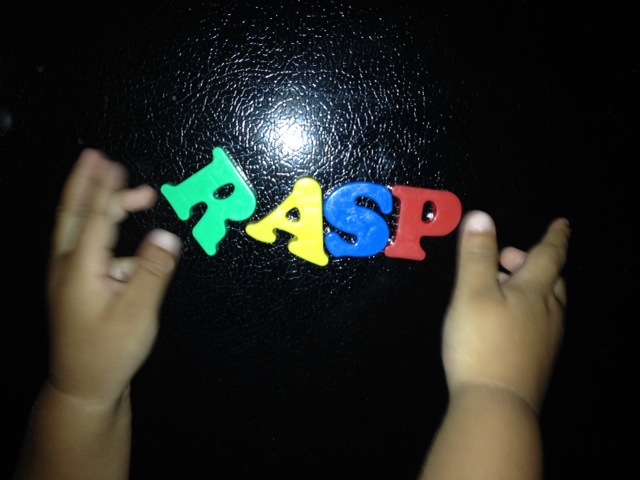 Not too long ago I purchased magnetic letters for the refrigerator because it just seemed like a “family” thing to do, but I also figured my boys could maybe benefit from seeing letters on the fridge and playing with them too! In the top photo, you can see where my almost 3 year old, Isaiah, put together the word “RASP.” I’m sure he has no clue what it means and even I had to verify that it was an actual word, but nonetheless it is and I was impressed at his consonant and vowel placement!! BRAVO!

My kids have a definite affinity for letters, maybe it’s because we watch a lot of Wheel of Fortune! And — as can be expected they say the darnedest things. The words they use and come up with and you scratch you head and think…where did they get that from!?!? Here are 5 words and word combos that give me a good chuckle every time they say them in the most serious way. 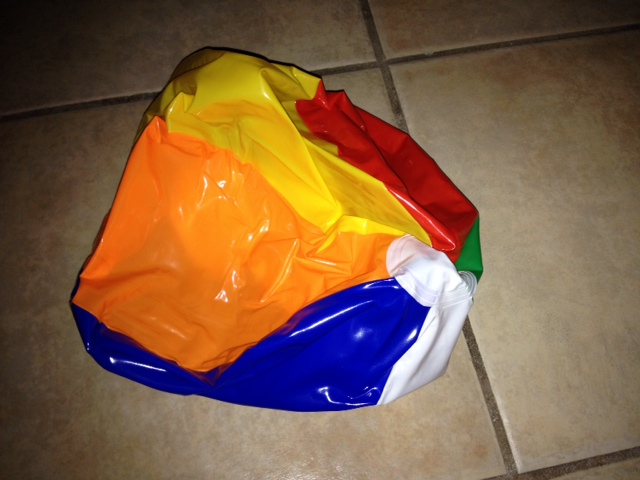 AIR PUMP – A few weekends ago, we went out with a bunch of deflated balls and the mission was to fill them up! I have boys and they want to play with their balls…so like any good parent I figured we’d roll out to a gas station and get some air. Right? WRONG. When we arrived at the air fill station, I realized we didn’t have the needle and so it then became a quest to find an “air pump,” and ever since then Isaiah will randomly tell me “air pump,” like that’s a solution to any and every problem. 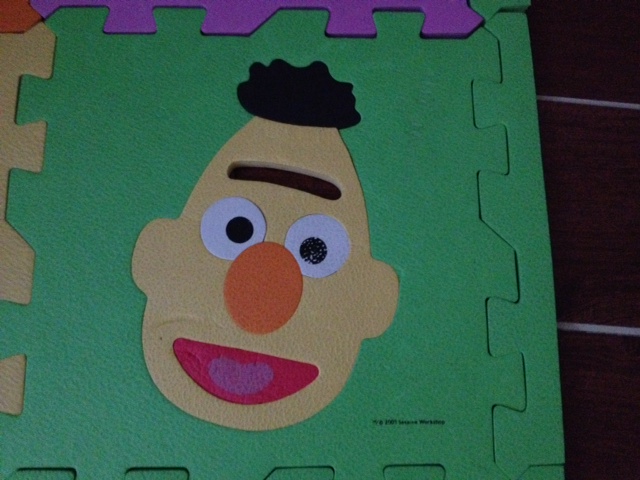 EYEBROW – In the boys room they have a Sesame Street puzzle floor mat and while they love to rip it apart and assemble it back again, somewhere along they way Bert’s eyebrow has gone missing. So now they have learned the word “eyebrow” and they are both concerned about the “eyebrow,” inquiring about it daily. 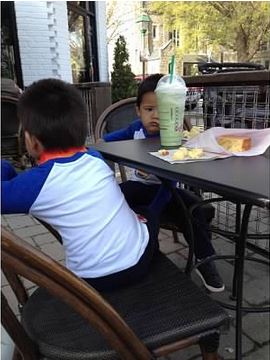 STARBUCKS – Okay, so what do you do when you need to leave a play area or go home and your child starts to have an “I don’t want to go home” meltdown?? Well, my keyword is “Starbucks.” Think what you want, both me and their father don’t even drink coffee, but I will have an Iced Chai and he likes the green tea! Then we started letting them eat the ‘Iced Lemon Cake’ and Houston we have a problem..or not! Lately, all I have to do is utter the word and they are ready to go…to Starbucks..which sometimes takes the detour to HOME…no tears, no complaints, no nothing. But yeah, when they have their mind set on Starbucks, they will keep reminding me they want cake and will point out the locations we see while we drive, which is like every block! ha!! 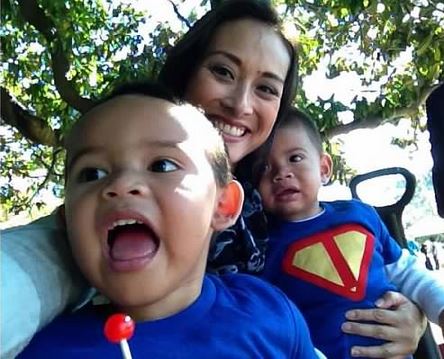 HOW WAS YOUR WORK? – A few times now while randomly sitting on the couch or hanging out, my almost 3-year-old toddler, Raef, will say “How was your work?” Say what? LOL! I guess he’s picked it up listening to Mom and Dad interact, but he asks in the sweetest way, like he genuinely wants to know. So, I give him the “work is fine” answer. Makes me smile and giggle every single time. 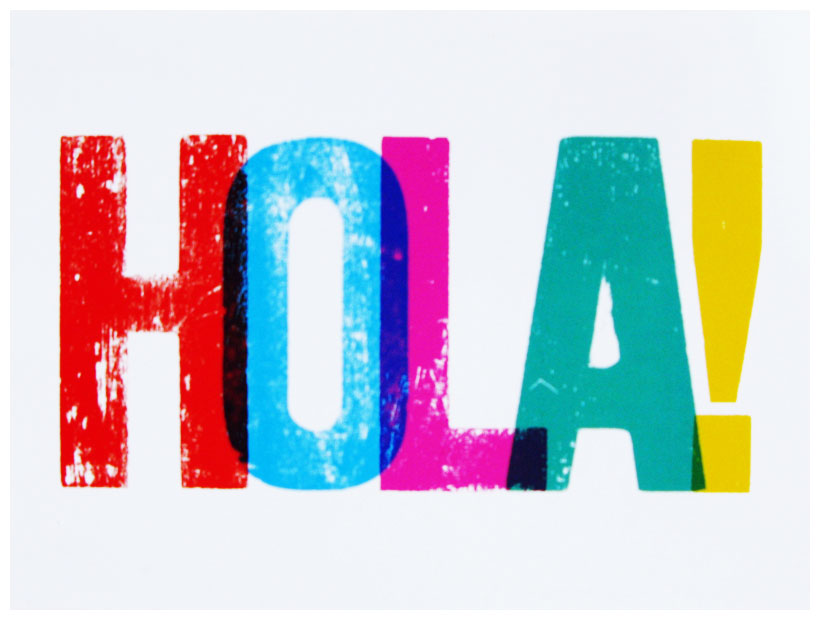 SPANISH – My children’s babysitter is a native Spanish speaker and a few of the boy’s’ good friends are Spanish speakers as well…plus they were born in Miami at a hospital in Hialeah – one of the largest Spanish speaking communities in the U.S., so my boys are kinda like bilingual a little bit! 😉 However, one of the cutest revelations ever was when Raef looked at me and said, “Oscar is Spanish. Raef is Spanish too!” Then a few days later, he made that same observation about his babysitter Beatriz. I’m not sure how/where/when he put it all together, but it totally melted my heart to learn he understands Spanish is different from English and attributed it to the right people! *side note, my kids stopped saying “‘shoes,” now it all about “ah-pah-tos” aka “zapatos.”* 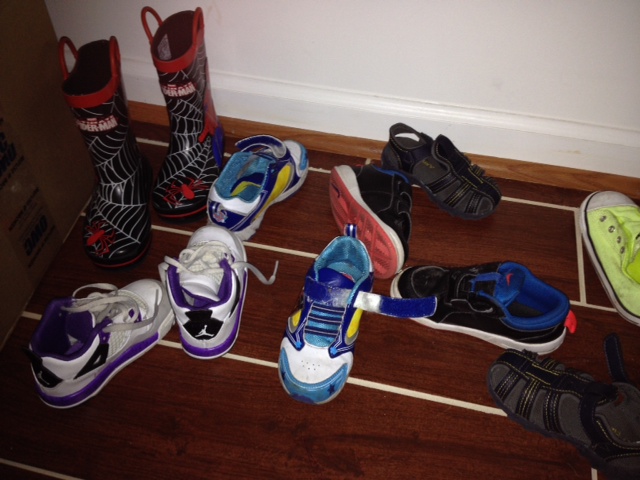 Man I tell ya, these guys are always listening. They know and can comprehend so much before we probably even realize it. One thing is for sure, it’s very entertaining and fulfilling to relearn and see the world through a toddler’s word play!

What eye-opening, surprising words did your toddler says that would give you a good laugh?