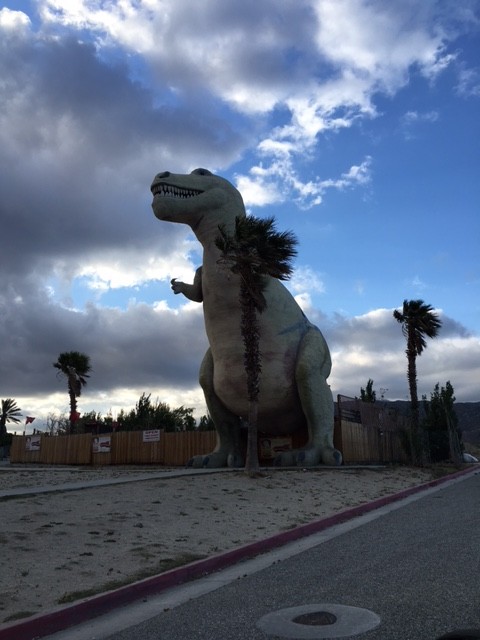 Along I-10 in Southern California, you can find dinosaurs in the desert in between the palm trees. I heard about the spot in Cabazon from a friend when I mentioned I’d be driving from Ontario to Indio. I inquired if there were any good spots for kids and this “pit stop” was mentioned…

Okay, so when I say pit stop, that’s literally what it is…an exit with a gas station, a Burger King and dinosaurs. Coming from Ontario it was just one exit past the Desert Hills Outlets (where I’ve heard there’s great shopping) and the Morongo Casino. 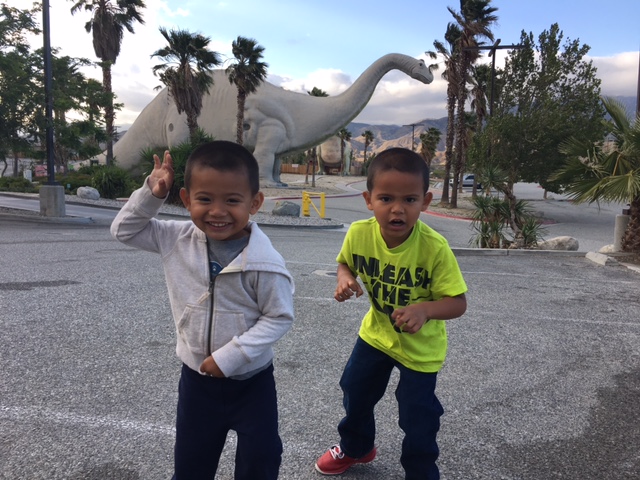 If you ever watched Pee Wee’s Big Adventure, and you can recall a dinosaur scene…this is them! And, these Cabazon Dinosaurs are a couple of giant concrete dinosaurs that stick out in the desert landscape.

It’s not a stop you need to make lots of time for…we literally snapped some photos from the Burger King parking lot. Although, my 2-year old kept asking me how we could get up there! Nonetheless, if you ever pass through the area, it’s worth it to stop and snap a pic or two with Dinny the Dinosaur, a larger-than-life-sized Brontosaurus and a 100-ton Tyrannosaurus Rex named Mr. Rex. I promise it’s kind of DINO-mite! 😉

BTW…my kids are only casual dinosaur fans, we went to the Discover the Dinosaurs exhibit a few months back…but the Cabazon Dinos definitely caught their attention and it’s FREE!!