Scroll to Top
Categorized as
4243
Tagged as
childchildrenchuggerschuggingtondatefamilyfunkidsmusicalparentspreschoolproductionshowToddlerstrains
Related 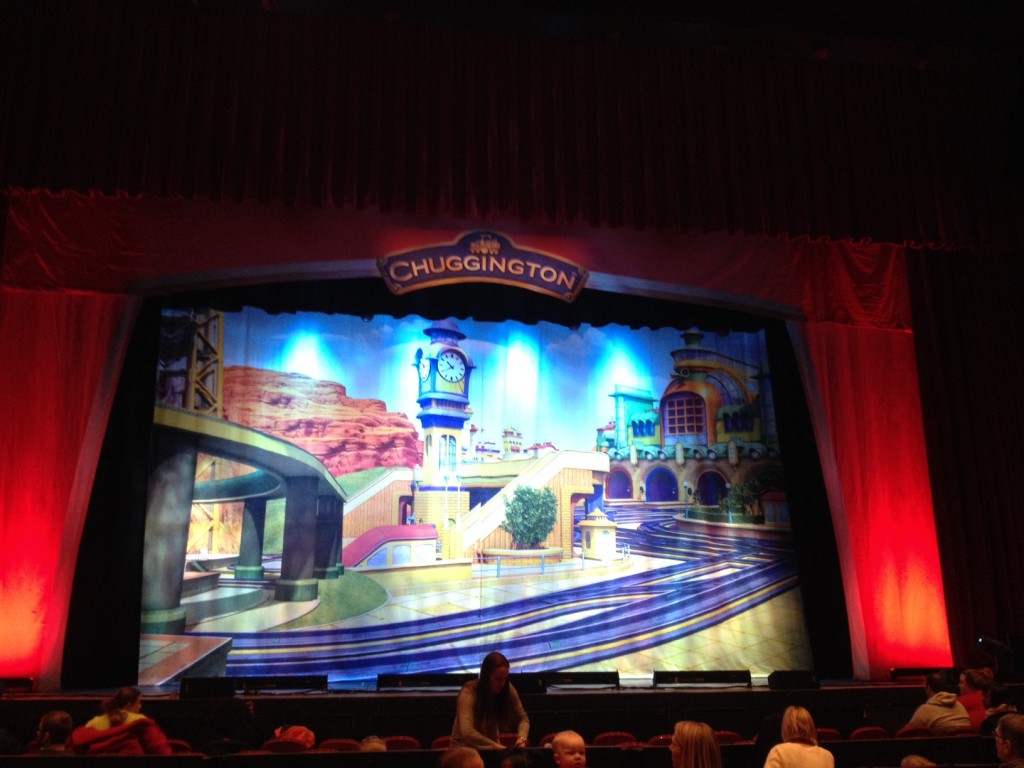 All Aboard! “Chuggington Live! The Great Rescue Adventure,” made a stop through Hampton Roads this past weekend and I packed up my family for a date night, to get on track, to see the trains. I wasn’t sure what to expect from the show, we are casual viewers of the show when it comes on Disney, and while my boys aren’t huge fans of “Chuggington,” they love trains and have a few train toys and a coloring book associated with the show, so they are somewhat familiar.

I was definitely wondering how they would bring the trains to life, I mean the stage at Chrysler Hall (or any theater) isn’t that big, so I was curious how the show would look. I did some light research into it pre-show (see above video), to get an idea of the production and I must say, in person it was very entertaining and well done.

Overall it was fun show infused with music and animated performers, along with the loveable train characters of Chuggington. The story centered on chuggers in training, trying to pass certain “tests.” The show also had fun crowd interaction and at one point my older toddler made me stand up too, because he needed a dance partner! 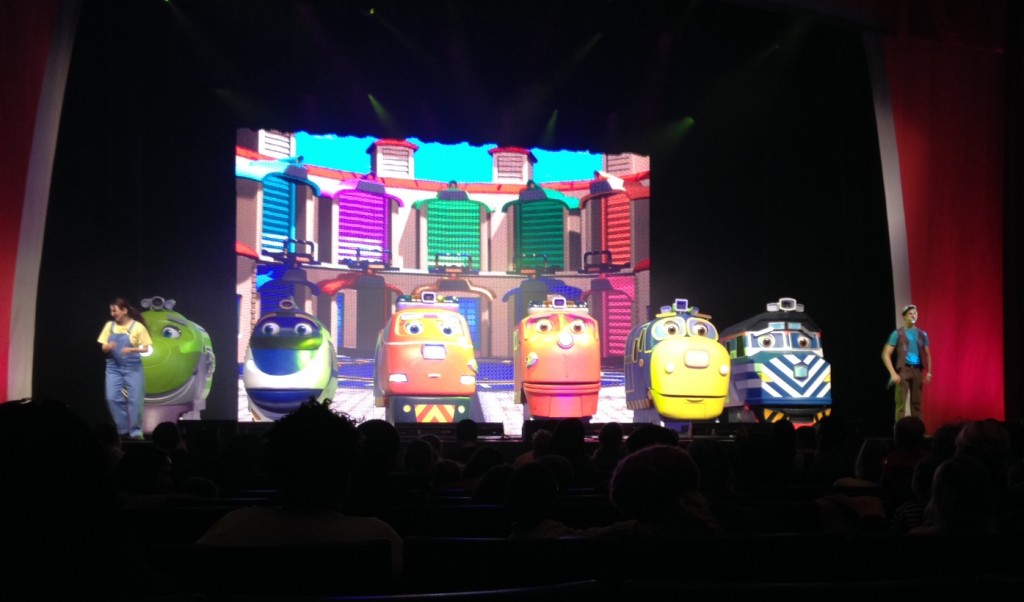 The various train carriages had life-like working mouths and eyes that truly gave sincere expressions and they had a huge video wall backdrop that gave way to different scenery with interaction and live action. The show really reminded me of the type of musical you might see at an amusement park. The performers in this show were personable and effortlessly infused dance and movement into the story line and compliment each scene.

So, it was a successful family date night…but there are a few things I learned that may come in handy for you if you go see the show, or one like it in the future.

Noise and Earmuffs
My little guy (19 months), immediately started crying and went into “panic” mode when the show started. We were sitting pretty close to the stage and it did seem a little “loud,” probably because of our proximity to the speakers. At first I wasn’t sure what it was…was he freaked out by the life-like trains? Did he get startled by the dim lights in the theater? But I’m gonna chalk it up to the “noise.” So, it may be a good idea to bring along some “earmuffs,” you know headphones or something to help diffuse the sound, or maybe consider this factor when purchasing your tickets and deciding where to sit. My older toddler (2.5 years), did seem a bit bothered by the loudness of the show, and covered his ears with his hands, until I got hip to it and put on his beanie hat that covers his ears…that seemed to do the trick.

Get Familiar
Like I mentioned earlier, we are casual viewers of Chuggington. I think if you are going to attend one of these character shows, it really helps if your kids know the characters by name and can sing along to the songs. Do some homework and prep before you attend so they know where you are going and then they kind of know what to expect too. I wish I had done a little more of this before we went. Raef did get pretty into it, as the show went on (it was about an hour with a 15 min intermission), especially when the trains he was familiar with were on stage. He’d clap and point and squeal in excitement.

Timing is EVERYTHING
Granted, these kiddie shows are never going to be super long…they are designed to hold the attention of a toddler or preschool age child, but really think about your child’s schedule and pick the time that will work best. We went to a 5pm showing of Chuggington, and that worked out pretty good because they got their afternoon nap and were fully refreshed for the outing. The show did start pretty close to the 5pm start on the bill, but timing is everything! Factor in travel time to park and walk into the venue, get settled and not rush. Are you planning to buy merchandise? Will you make a restroom stop? Are the kids going to be hungry? All things to think about…but at the same time you don’t want to get there too early because if your kids are anything like my boys, they can get restless quickly. So pack some snacks and small distractions (toys that match the characters in the show are perfect), along with the patience, because when you attend a live show, it isn’t always “on time.” 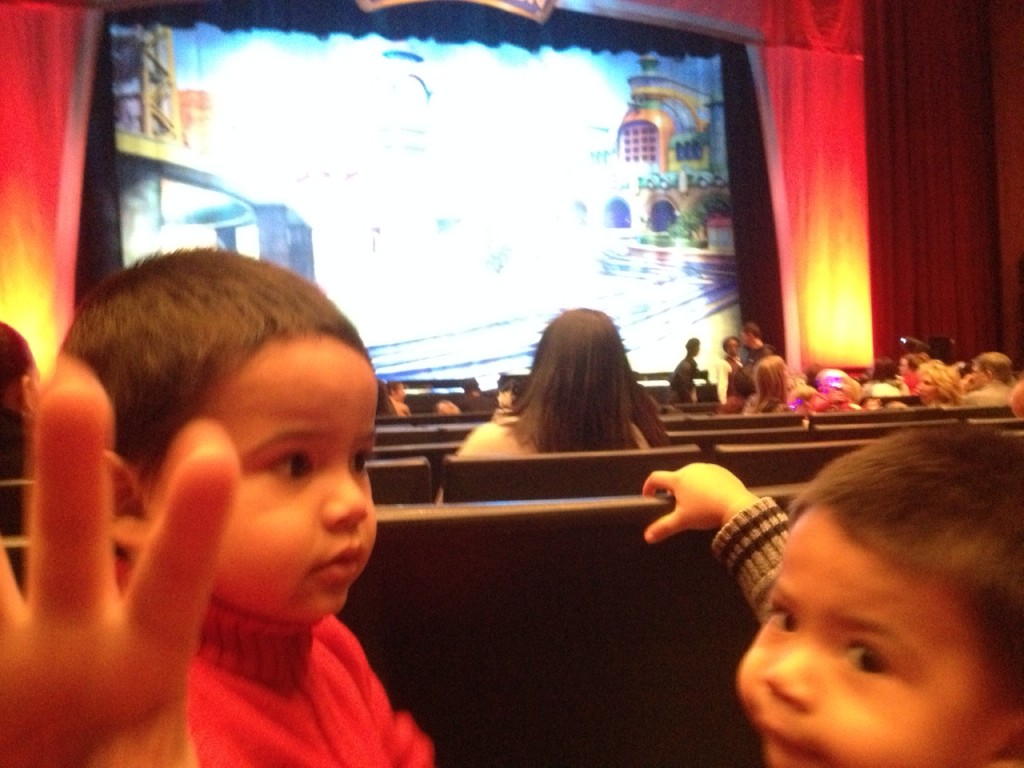