Scroll to Top
Categorized as
2267
Tagged as
boyschildrenkidsmarvel universeshowspidermansuperheroToddlers
Related 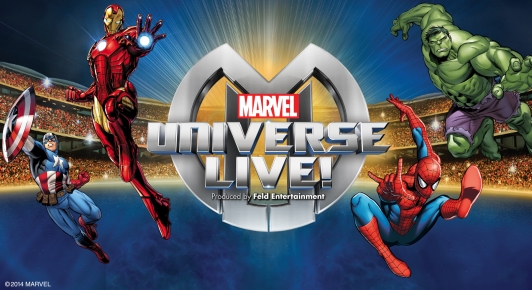 The Marvel Universe Live! show recently came through town and just like any dutiful parents would, we took our 2 boys to see some superheroes. I debated in my head at whether or not they would be too young to understand or enjoy the show, but it was down the street and a matinee showing, so why not!?!?

My toddlers aren’t super familiar with super heroes…they have a few Spiderman this and Batman that items around the house, but it’s not something we really have introduced to them, so we went into it knowing that they may not make it through the entire show, which was a-ok…just wanted to try!

Anyhow, we arrived at the venue and tons of kids were dressed up in character, and I saw lots of other like-aged tiny tots also in attendance, so I didn’t think they were out of place. Once we sat down and the show was about to begin, I thought, okay…this might just work out. However, as soon as the lights dimmed and the first pyro and loud noise popped off, my 1 year old immediately started to cry and…well “panic.” My 2 year old began to whine as well, I’m sure he was just trying to figure out what exactly was going on…but he managed to calm himself down and his solution was to hold his hands over his ears.

The first half of the show I sat out in the concourse, where my 1 year old was all too happy to just hang out and look at all the colorful merchandise surrounding us. At the intermission, we switched places and I stayed with my 2 year old, while Isaiah went out to hang with Daddy. I could tell he was curious to see the show, but every time he attempted to reenter the arena, the loud noises and darkness pushed him back out.

From what I was able to enjoy of the show…the costumes and characters were great. The dialogue was kind of corny to me, but I guess that’s what you get with comic book superheroes! Everyone around me seemed to really enjoy it and the people who I’ve talked to that did go have all given it great reviews. Fun stunts, creative choreography and action…plus all the superheroes in one place, how can you go wrong?

I know my little Isaiah wasn’t the only one being “scared” by the loud noise, in fact I saw lots of parents coming out with startled children and/or buying earplugs to help with the sound issues. If you asked me what age is appropriate I’d say maybe it’s best for preschool aged 4 and up…BUT it really depends on the child. I do recommend bringing earplugs or headphones to help with the noise, especially if your little one is sensitive to sound. The pyro and music, narraration, etc… can be a bit much, especially if it’s your kid’s first show.

And — here’s another little warning, which also make me chuckle. As I said, my boys hadn’t really been exposed to the “superhero,” so wouldn’t you know it… as soon as we left the show, Raef decides to reenact Spiderman and I became his “victim!” Basically he sort of tried to do the kicks and punches he saw..not to hurt me..but because that’s what Spiderman does when fighting the “bad guys!” As a Mom, I have enough bumps and bruises as is…so I had to give him an extra lesson about kicking and punching… He also insists on wearing his lone Spiderman shirt as much as possible, might be time to invest in another!