Scroll to Top
Categorized as
3699
Tagged as
babyboyschildhoodgrandkidsgrandpagrandsonguitarjammusicpajamaToddlers
Related

Family Outing: The Wiggles in Concert 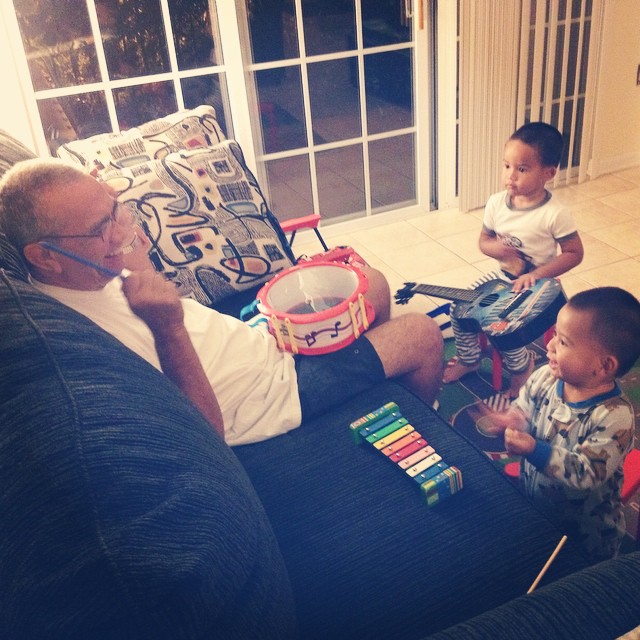 One of my most fond memories from childhood with my father, are the weekend mornings when he’d pull out his guitar and play records and get to jammin’. I don’t think he consciously did it for my benefit, but as far back as my memories go, I can visualize my Dad playing his guitar as I danced around the family room.

So, when Grandpa (my Dad) came into town to visit with his only two grandchildren, I was hoping he could recreate that same musical magic with his grandsons. Raef and Isaiah have already been showing their musical sides when they dance or start bobbing their heads to music in the car, or on TV, etc… and we’ve also noticed how much they love playing with musical instruments…it definitely ranks among their favorite things to do – to make noise! 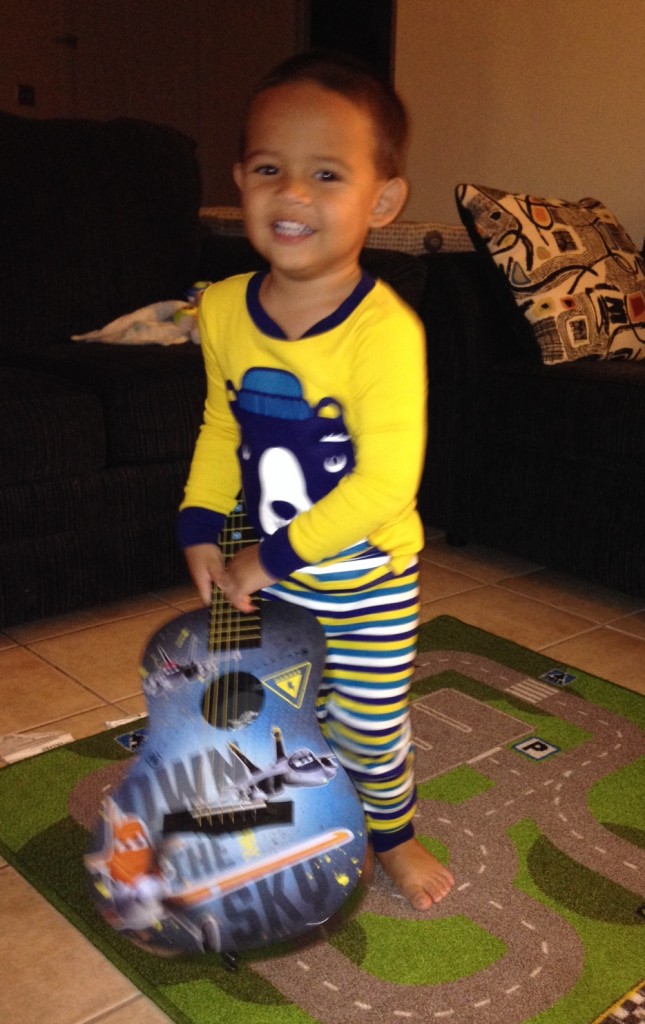 In preparation for the visit, I borrowed a full size acoustic guitar for my father to play while he was in town…and I also invested in a smaller 30″ child size guitar for Raef to “shadow” Grandpa. It was a cute “planes” themed guitar for like $20 – BTW, really great quality for the price…and it worked like magic! Not only did Raef immediately lay claim on what he repeatedly will tell you is “my guitar,” while warding off lil bro Zeke who is all too anxious and curious to strum the strings too, he wanted Grandpa to play HIS guitar.

And — this is how it went down. Every night after bath time, the boys would gather next to Grandpa and have their own “pajama jam session.” Grandpa would play the guitar and they would dance around, but then (like in the above video) something really cool happened. Raef took the initiative to grab the xylophone and play along, so of course we pulled out the drum, tambourine, and kazoo too, so the whole crew could take turns playing the different instruments. I mean talk about “precious” moments, it was like having a live band in the living room. I can’t begin to explain how wonderful it was to see my boys bonding with their Lolo (Filipino term for Grandpa), paired with the sheer joy and laughter that ensued, it was priceless.

Music is such an important part of early childhood development and I was lucky enough to grow up with music in my home, so to be able to give this dose of a “jam session” to my little ones means so much. The other cool thing that came out of this, is that the days following the initial pajama jam, when Raef would wake up, he’d ask for his guitar (instead of the ipad or TV), and now he’s been singing non-stop. At one point, we sang the ABC’s along with Raef at the helm of the guitar, and now he takes the initiative to be the singer and instrument player. Makes me smile just thinking about it. 🙂