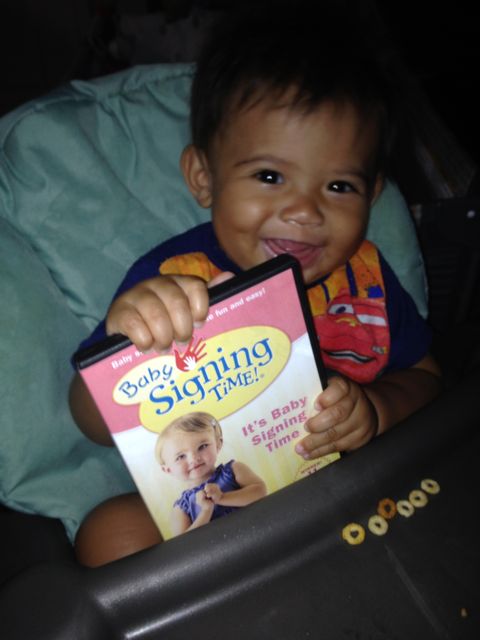 The idea of teaching my baby sign language first came to me, when a good friend of mine told me she was teaching hers how to sign and it was working! I mean if you think about it, one of the most frustrating things for babies and toddlers is that they can’t communicate whatever it is they want to tell you…so if signing their “desires” can help eliminate some of that frustration, why not!?!? I first checked out a couple DVDs from the local library, and would casually just play them while he was eating or playing, and I can’t recall the names of those DVDs, but he didn’t seem to be very interested. I think he was a little more than 3 months when I first tried to introduce him to “signing.” Well, I waiting another month or so and ordered the DVD m friend was using that was working so well, “Baby Signing Time.” Everyday at breakfast or while I had him in his highchair, I’d play it and for the first couple months, nothing, but slowly I could see him becoming familiar with the music and songs, then eventually starting to do the hand movements!

I really liked this particular DVD because the songs (like many children’s songs), are pretty catchy…and these ones aren’t too annoying! ha! There are a few cute character’s in the DVD and in addition to the host, they’ll show various clips of children signing in different settings, which is great because I think babies love watching other babies, so it helps keep their attention too!

I definitely felt a sense of accomplishment, when it became clear to me that my baby boy knew some signs…after he crossed the one year mark, I sort of let up. I guess I could’ve continued, because it’s a series of DVDs to keep expanding their “vocabulary”…but then baby #2 came and I had to divvy up my time and attention. I haven’t been as “on it” with my second son, but I still do occasionally play the Baby Signing Time DVD that we do have, and #1 still sings, dances and signs along with it! I’ve also noticed on the various children’s channels (Baby First and Nick Jr.), they have cut-in vignettes where they teach sign language too, so I think that’s pretty cool!

Watch the video below to see my son (#1) and my friend’s little girls show us some of their “signs,” all courtesy of the DVD instruction! **Note** Getting my son on video doing the signs was quite a mission, he’d be signing away and once I put the camera on him…he didn’t want to cooperate! LOL!!!