The Memorial Day Holiday weekend is next week and whether you’re having a BBQ, cookout or perhaps marking a birthday or just celebrating in a patriotic way, I wanted to share some of the details from my son’s first birthday, a “Stars and Stripes” themed bash, which was pretty much everything red, white and blue! The nice thing about this theme is that there’s lots of “Americana” and “Patriotic” party stuff available out there! These days with Pinterest and Etsy, generic is NOT the way to go! hehe 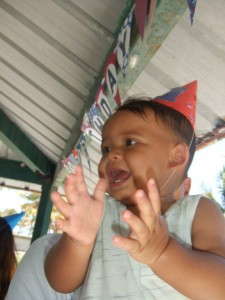 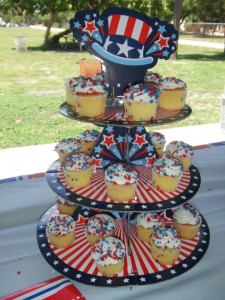 In the photos above, you can see my firecracker clapping it up in his homemade #1 birthday hat. I bought plain red and blue (cone) birthday hats and adorned them with red, white and blue “star” themed stickers and cutouts. In the background you can also see (sort of) his custom Happy Birthday bunting, made with an assortment of patterned pennants strung together. And, what’s a party these days without a cupcake tower!?! I had to get one of those and filled it with mini-cupcakes decked out with red and blue sprinkles! 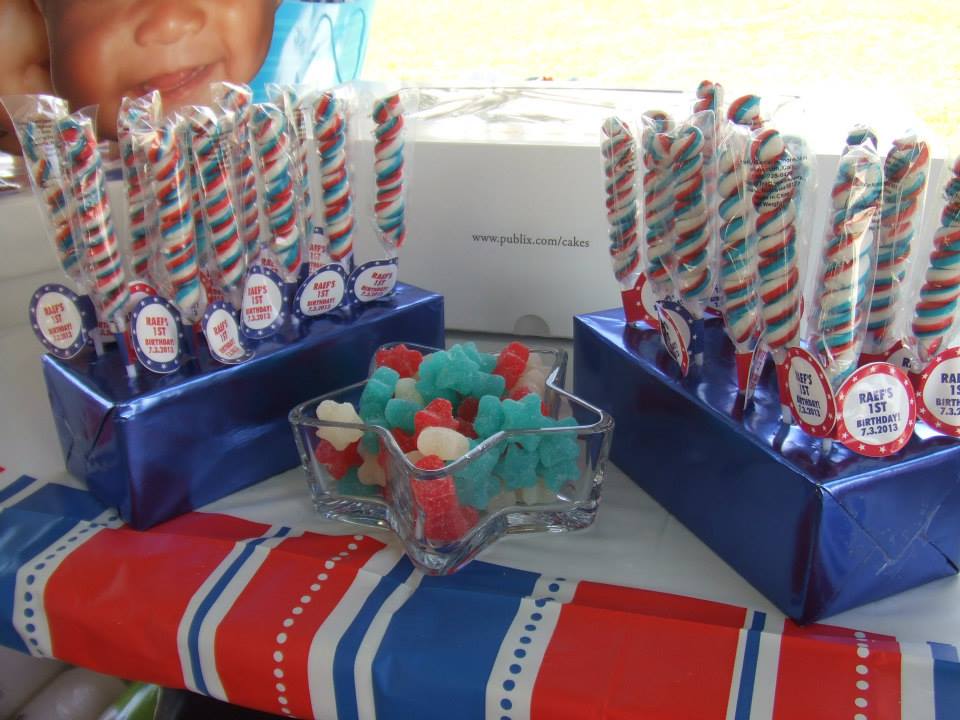 Then I also found some fun “stars and stripes” candy… swirl lollipops with birthday tags, and red, white & blue sour gummy stars. I also made centerpieces (not pictured) with cylinder vases and filled them with the gummy stars and stuck matching pinwheels and small #1 mylar balloons..but the wind kinda didn’t work with me and so they didn’t photograph too well! grr!! 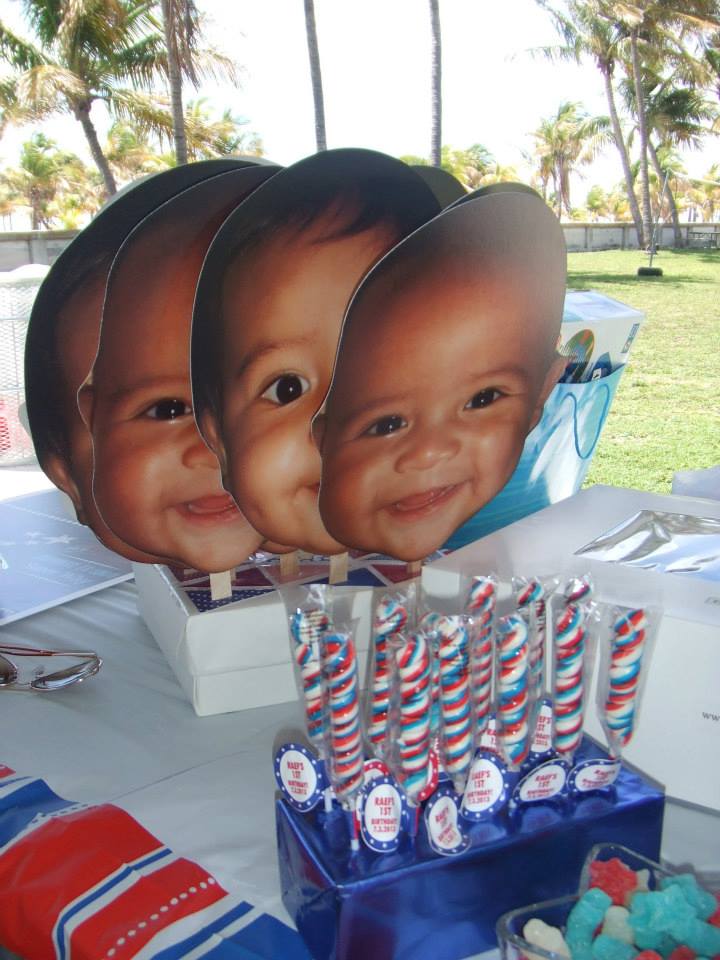 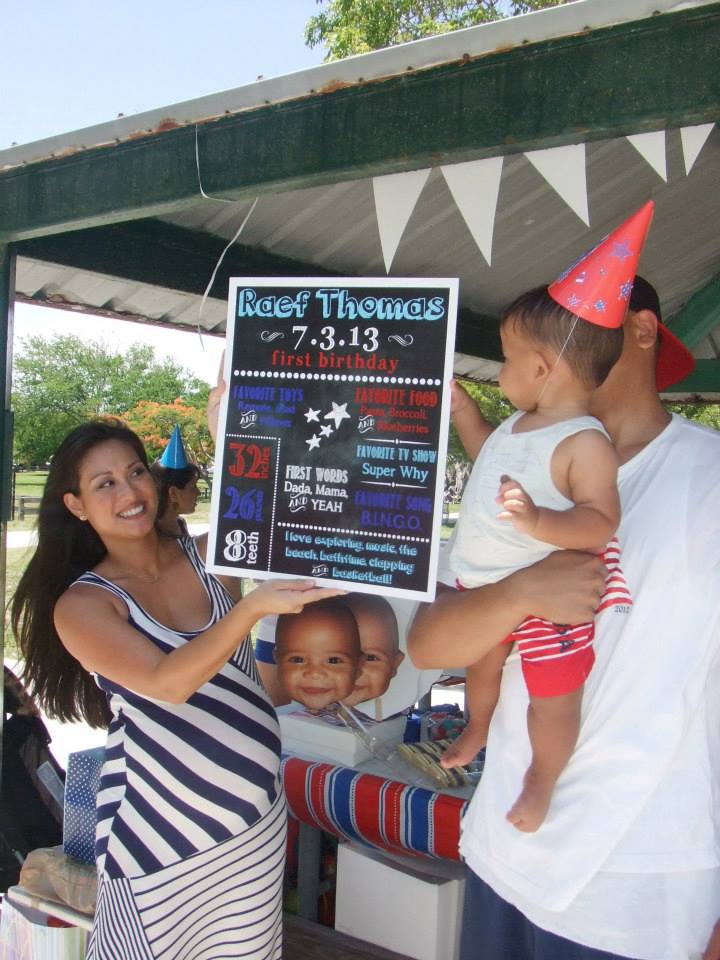 However, the big face cut outs were a BIG hit! I was looking for something different using his photos…and the faces were FUN!! They provided good photo ops and also doubled as a fan on a hot day in July. The babies also got a kick out of seeing a BIG baby face on a stick! LOL!! Then I ordered a first birthday “chalkboard” off Etsy. A cute, keepsake idea as it lists his size, favorites and memorable “firsts” for baby’s 1st! 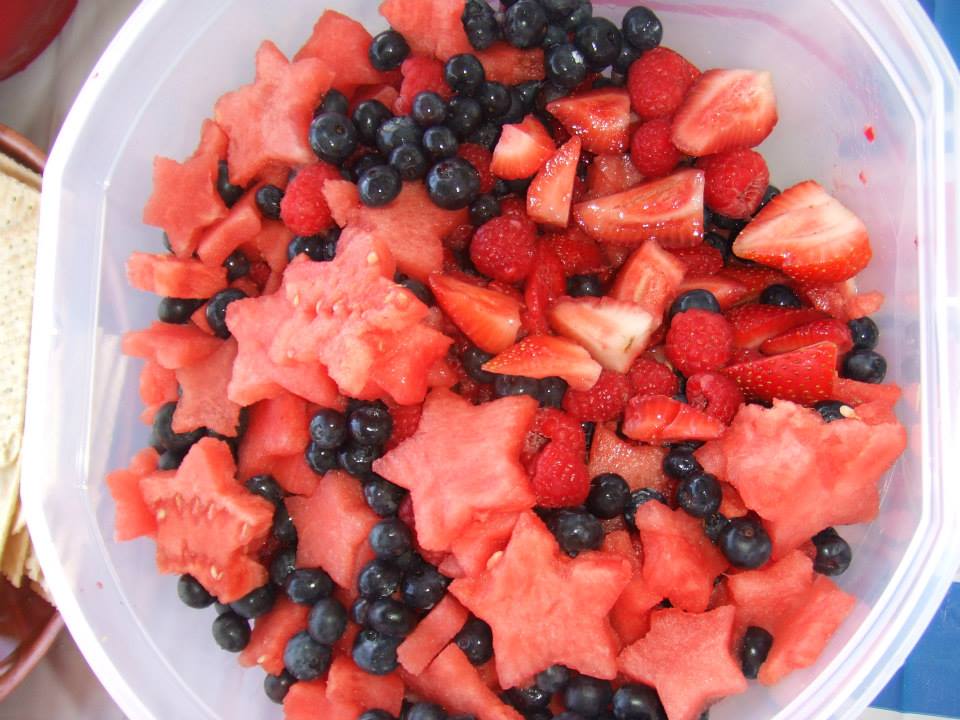 Then there’s always the food, which I could keep entirely red, white and blue…BUT I managed to have fun with this fruit salad, complete with “star” shaped watermelon. Another themed food item were the white and blue (corn) tortilla chips and “red” salsa!

Finally, I also ordered a pull-apart cake made up of cupcakes…nothing too fancy, but it still made a “cool” impression. So those are some of the highlights from the first birthday party. For future reference though, when having a party at the park, opt for heavy table covers, as my flimsy plastic ones couldn’t withstand the wind…and tape wasn’t the answer! Also, I had a stand for my chalkboard poster (BTW…had it printed and mounted at Walgreens), but that also couldn’t hold up with the strong ocean breeze! ha! Foodwise, I think we did a good job, stuck to hot dogs and hamburgers and chose salads, fruits and sides that didn’t perish too quickly in the heat.