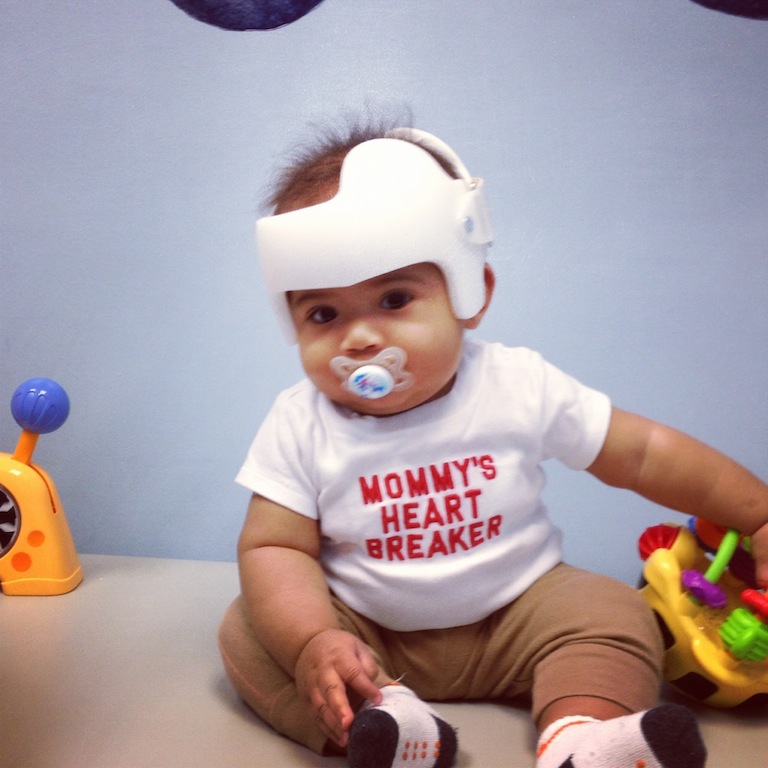 If you’re not familiar with the “baby helmet,” and not sure what it’s all about, this post is for you. First things first, when you see a baby or young child with it, there is nothing “wrong” with the baby. Secondly, it is not to protect their head from falling or head butting, although it may inadvertently be doing that… Lastly, it doesn’t hurt the child nor “squeeze” their head. In our case, my second son Isaiah is now wearing a DOC Band (baby helmet) from Cranial Technologies.

The band is designed to help guide and shape the baby’s head into a more natural, round shape if the baby has asymmetry or flat spots. This condition is plagiocephaly. In Isaiah’s case, he has brachycephaly where the head flattens uniformly, causing a wider and shorter shape…increased head height is also common in baby’s with this condition. And — since these days the recommendation is to place newborns and infants to sleep on their backs (prevents SIDS), rather than their stomach’s, the numbers of kid’s with flat spots has increased. 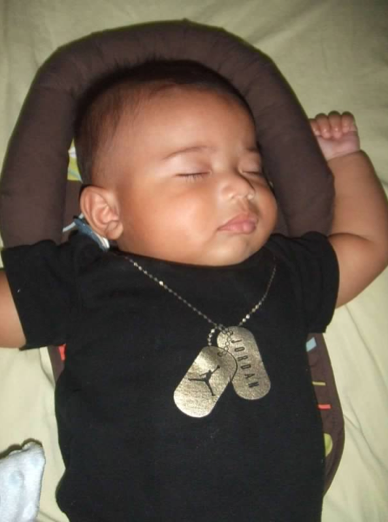 I started noticing Isaiah’s flat spot pretty early on, it was actually more of an indent where the back plate of his head meets the top plate (sorry for my non-medical terminology). However, when they’re so young, you are waiting for the soft spots to slowly close and they don’t move too much, so even when I tried to rotate his head to each side while he slept, he favored keeping his head straight on…so in his case, his sleep positioning probably didn’t aid much in allowing the head to “round out” early on. At about his 4 month mark when we weren’t seeing the “flat spot” improve as much as we’d hoped, I did a little more research and found the “Noggin Nest” by Boppy. I wish I had come across it sooner, but it is basically a pillow designed to keep the baby’s head from being flat on a surface like a baby swing, stroller, car seat or in the crib…to encourage the shape to be round. I think it helped a lot, but not enough. We were told that 6 months is the best time to have professional evaluation on the “flat spot.” At this point, you’ve given the baby’s head enough time to see if it corrects on its own, but the head is still growing, so not too late to help shape it.

We immediately did a consult with Cranial Tech (makers of DOC Band) and also sought the advice of a craniofacial plastic surgeon. Dr. Chad Perlyn of Miami Children’s Hospital took a look at Isaiah’s head shape and advised us that his case was borderline severe, but not quite. He felt that his head would most likely fix itself and round out over time, but he noted that if we elected to do the baby helmet, it would definitely help. Dr. Perlyn told us that in most cases a child’s head will naturally get to the desired shape, and only a small percentage actually stay flat. Needless to say, after digesting all the information, we decided to go with a DOC Band for Isaiah. Our reasoning is that if Isaiah happened to be in that small percentage that didn’t fix itself, we want to know we did our part to help it round out before it’s too late – i.e. the skull is fully formed! So, so good…we got it “wrapped” (see DOC Band Swag) at Metro Signs for the custom “design,” and one of his first full night’s wearing it he slept through the whole night! He usually doesn’t…my (big) baby loves to eat! The helmet is pretty light, so the adjustment was easy for him. He wears it 23 hours a day and we clean it and him, when we remove the helmet for bath time. Hopefully his treatment will only be 8-10 weeks, it’s really our decision, when we feel we are happy with the improvement. At every check up they compare his head to a mold of his head when we started, at last check they shaved off a bit more inside the helmet to give room for more growth, which they already saw starting… 🙂 When it’s all said and done, I will write a post on the entire experience!