The Ringling Brothers Barnum and Bailey Circus was in town and we decided to take a family outing to enjoy the “Greatest Show on Earth.” Since my boys are 18 (Raef) and 6 (Isaiah) months respectively, this was the first time we had even attempted to take them to a show, so we were just going to go with the flow. We opted for a 3pm matinee on a Saturday afternoon, and that was actually one of the biggest (in attendance) for the circus. There was a decent size crowd entering the arena when we got there and by the time we were able to move toward our seats, the show had already begun and the elephants were exiting stage left… While Isaiah was oblivious to it all, he’s just happy to be held and have different stuff to look at, Raef who’s now oh SO observant and curious about EVERYTHING had a bit of a panic attack when we were being ushered toward our seats as the lights were dim, huge elephants were walking by and there was loud music, dancers and bright lights all around! Can you say sensory overload?!?! Nonetheless we got to our seats and after a few minutes Raef calmed down and was clapping and cheering, taking in the sights. Isaiah was his happy drool-y self, in awe of all the activity. 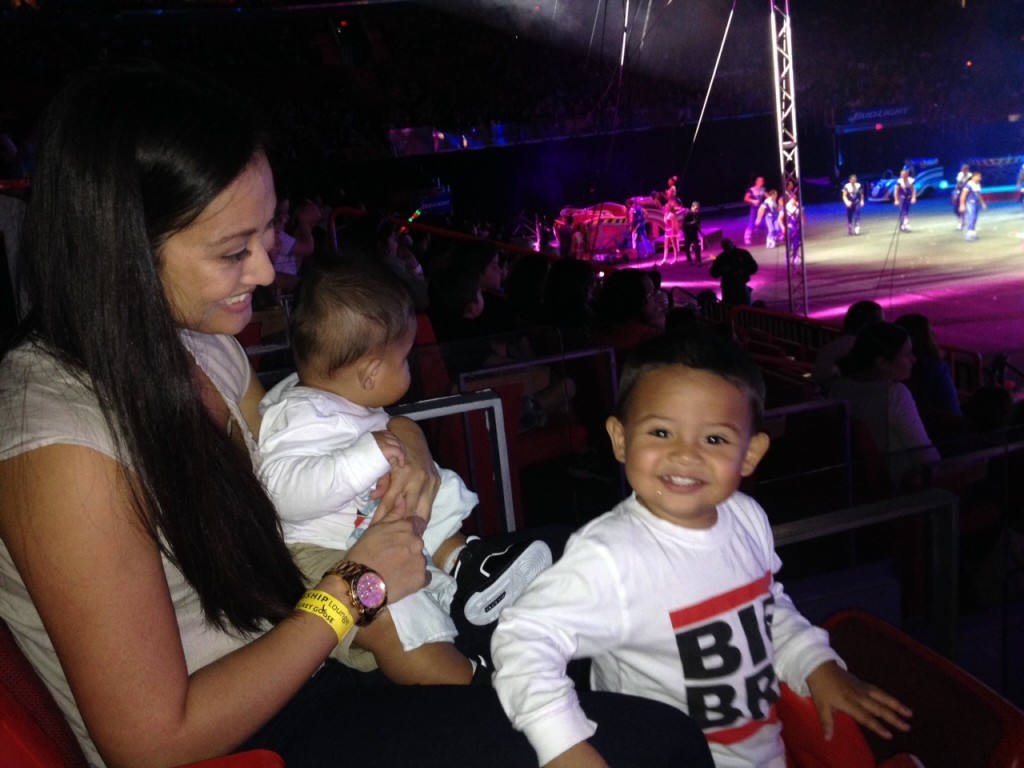 I can honestly say this was only the 2nd time in my life I had attended the circus…well, I’ve covered circus’ for work stories and been a to a few cirque shows, but the only other time I had been to a Ringling Bros show, was when I was a little girl (maybe 3 or 4), and this is what I recall – that we were out at night, there was lots of people, it was very cool to see the exotic animals so close & I want to say we sat in bleachers…I think it was at the Cow Palace in the Bay Area…oh, and I got to go home with an inflatable pink Barnum and Bailey elephant! Whatever happened to that guy?!? The circus has come a long way since then, but it’s nice to see that they’ve kept it pretty traditional with the elephants, tigers, tightrope, acrobats, human cannonball and of course the clowns!

It is a good show, we didn’t make it through the whole thing, we took off after the intermission…maybe when the boys’ get to be a few years older, they can really appreciate it and sit through the entire program.