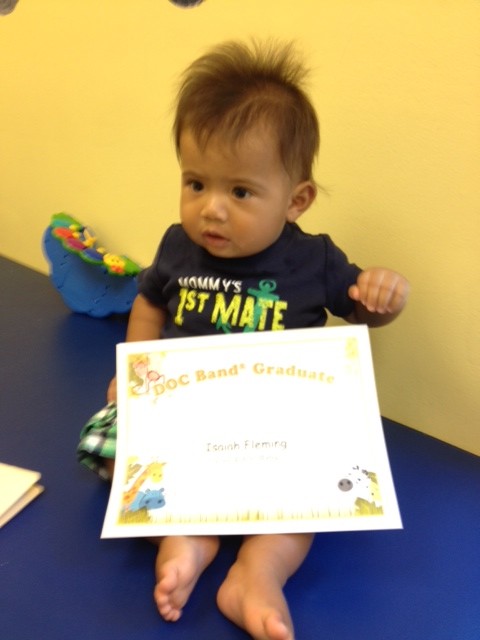 My baby boy is a DOC Band Graduate! After exactly 3 months of wear, he said “bye bye” to helmet head. The journey was much quicker and easier than we could have ever imagined and we are glad we made the decision to get one for him. In hindsight, I think it was especially nice for him to have the “head gear” during his 6-9 month age range, because it certainly afforded him extra protection as he began maneuvering around as an independent sitter, crawler and eventual standing cruiser, during his time with a DOC band. Sure, that’s definitely not what it’s for or why we needed one, but hey, it was a nice “bonus.” 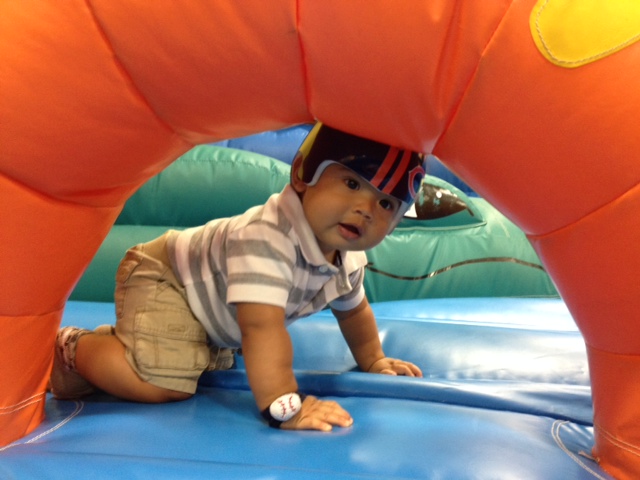 At any rate, we had a wonderful experience with the DOC Band and Cranial Technologies. For the duration of the treatment, we visited the office every two weeks (frequency depends on each individual case and baby’s age), and with each visit they measured his head and shaved off part of the inside of his helmet to give way for more (head) growth. The DOC Band acts like a retainer and is custom made for each baby, to promote growth in the areas where needed. In Isaiah’s case, he had some asymmetry and flattening in the back of his head called “bracycephaly.” He also had this indent, in the back of his head from his fontanelle… 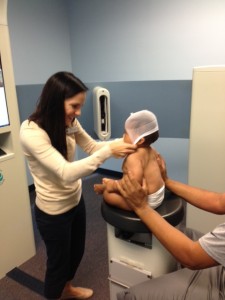 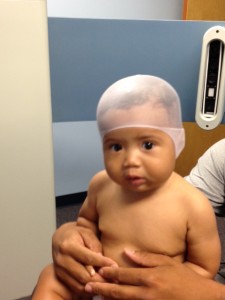 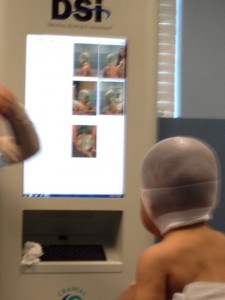 Here’s a few shots of him as he gets his final head measurement. It’s actually pretty cool how they can pretty much create instant 3D imaging of his head shape. They put on the nylon stocking…you know, to control the flyaways! 😉 It’s a really quick procedure if they can get the right “shot”…just a minute or so. 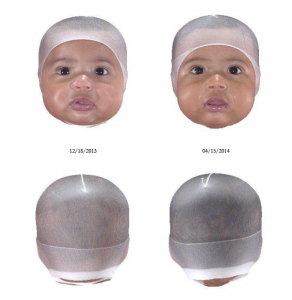 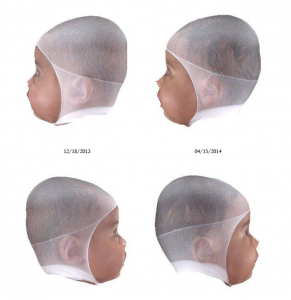 And — here are the comps from start to finish. Basically, the changes may seem subtle, so look closely….BUT his head shape “rounded out” more, gaining more height toward the front of his skull, as well as in the back where it filled out, so not to have such a “flat” appearance. The indent from his fontanelle filled in some too, and we are confident it will most likely continue to fill out on its own by the time he’s 2, when the bones will completely fuse and harden. 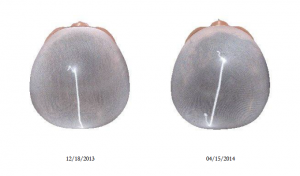 In their technical analysis they have stats for the proportional ratio of width and length, as well as the diagonal asymmetry, which are interesting…but again it is simply amazing to witness the results as it happened, and then to now compare the visual “before and after.” 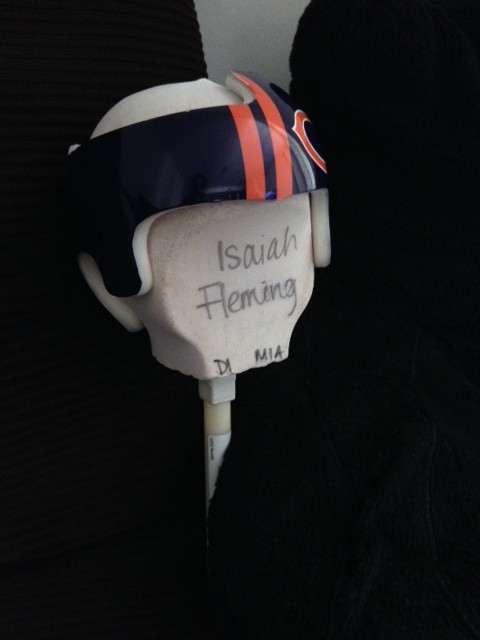 We brought his head mold home as a “souvenir” of the experience…it makes for a nice “resting place” for his DOC Band! Overall, we’re super happy with the results and it was the right thing (for us) to do. On a side note, it’s an instant bonding thing with other parent’s who’ve had children who also wore a “baby helmet,” we’re kinda like an elite group!

For more on our DOC Band adventure, visit my previous posts:

Here’s the Deal with the Baby Helmet
DOC Band Swag