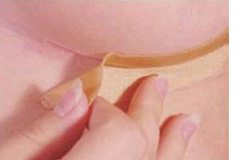 I didn’t plan to have a c-section, but I did…and while I wasn’t oblivious to the possibility, or so set in my “birth plan” to be totally natural, I definitely was not prepared for the recovery and after effects of having major abdominal surgery via cesarean section. In my first pregnancy, I was doing the walking, the prenatal yoga, taking birthing classes, reading books ad everything else first-time mothers do when expecting a baby, to prepare for a “natural” delivery. There were indicators early on that the baby inside my womb was larger than average, and I monitored his growth closely, knowing that if the baby got too big, a vaginal birth might not be possible. At any rate, we decided to induce 5 days early to get things going…since measurements kept indicating the baby could be 10 pounds at birth if we waited til the due date. And, even when I went in that night to begin the induction process, the ultrasound again read that my baby was on the “border” of the size the doctor would attempt vaginal delivery or order a c-section, so we had to hold off until my doctor could give his consent. Well, since I’m not super petite or anything, and my doctor knew how important it was for me to go for the vaginal birth, he gave the green light to go ahead and start inducing. Everything was going fine, I was dilating and feeling great (with an epidural)…but when I hit 6 centimeters, we started having problems because the baby wouldn’t drop into the birth canal, and they suspected the cord was around his neck and tightening every time he tried to go down. So that, paired with another “issue” my doctor noticed, immediately sent me to the operating table for a c-section.

Okay, so fast-forward, recovery from this surgery is no fun and the healing process is pretty tough, but I’ll save those details for another blog. Right now I want to talk about the SCAR. Originally I hadn’t been too concerned about a bad scar or keloid developing because I had my appendix removed several years earlier and that scar healed so beautifully, it’s like a faint line…only noticeable when I point it out. So I figured my skin wasn’t the kind to do that! Boy was I wrong. It could have something to do with the type of stitch (I had the melting kind for my appendix and suture for the cesarean), the size of the incision and/or the location…whatever the case may be, mine wasn’t so “pretty.” Now in my case, I found out I was pregnant again when my scar was still less than 5 months new, so instead of obsessing over it, I had another baby to look forward to! However as my belly began to grow (again), so did the scar and it quickly turned into a “keloid,” and I couldn’t help but look at it, touch it and think about how to avoid the same kind of scar the second time around! The other downsides of my scar included discomfort (itch) and pain (soreness) at the site…not to mention there’s another internal incision that we can’t see! I’ve since found out that the scar continues to “heal” for at least a year and can sometimes take longer. Well, after speaking with my doctor, one of the positives of having to undergo another cesarean surgery to deliver baby #2 was that he would be removing the scar! And this time he would inject a steroid into it when he applied the stitch to try and help combat another major scar from developing.

When it came time to deliver my second son, the scheduled surgery was on the calendar and I felt like I’d be so much better prepared having gone through this once already. And while this time I knew exactly what to expect and felt more relaxed going into it, there is no avoiding the “pain” of surgery and the possibility of scar tissue posing a problem. In my case, the internal scar tissue did add some complications after delivery, but thankfully everything was handled expeditiously! The week immediately following the birth of my 2nd baby boy was again tough to get through (I think we forget how painful things can be), but soon enough I was on “scar watch.” I will say, that I was happy to see the not so nice looking original scar gone and having a smooth skin surface in the abdomen area, however after a month or so, the thing started to raise again! Ugh!! 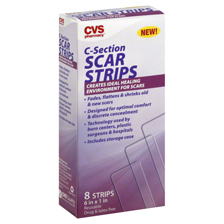 There are all sorts of scar remedies, creams and so-called solutions out there, but what really works is going to the dermatologist and having it checked out!. My dermatologist told me to stop applying neosporin, vitamin E and whatever else. She told me I should continue to use the silicone scar strips – I chose to use CVS brand “C-Section Scar Strips,” because they promote a healthy healing environment for the scar, and she also injected me with cortizone shots along my scar, to help flatten it out and lessen its inflamed appearance. Since my first visit and that set of injections I have noticed improvement and if I knew it would stay how it looks right now, I’d be fine with it…but since I’m only 4 months post-partum and the scar site still has a lot of healing to do, I’m not putting my money on it. My dermatologist advised me to go back in 3-4 weeks following the original appointment and that’s what I’m going to do.

I love my scar because the surgeries were the vessel for my 2 beautiful boys to find their way into my arms…but I don’t need it to have such a pronounced appearance down there!