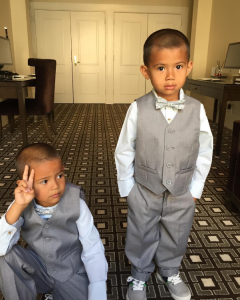 A toddler can add that little something extra to just about any event. Perhaps it’s the instant enthusiasm, never ending energy or just that wide-eyed innocence and the unassuming personality, but whatever it is, when there’s a toddler around, nothing is certain.

One event toddlers aren’t always welcome at is a wedding, many times these are “adult only” events, which is totally fine by me. However, my boys have had the opportunity to attend and be a part of two weddings already in their toddlerhood! Last year one of my sisters got married, and just last month, my brother also took the plunge. And — since we are family and my boys are the only nephews…they got to be ring bearers for each occasion. 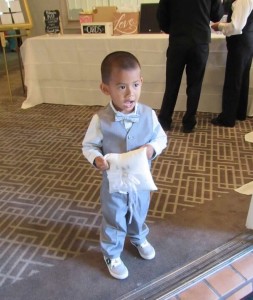 All that being said, my littles did great for both events, but I’m not gonna lie, it was slightly stressful for me to manage two super-active ring bearers. Some of the worries I had were, would they cooperate and wear the fancy clothes? Could they follow instructions and carry a pillow down the aisle? Are they going to smile for pictures? How will they fare during the ceremony?

I think everyone understands – or at least they should, that they are kids who can still count their number of years in this world on one hand, so imperfect behavior is acceptable. However, since I’ve now experienced 2 weddings with my 2 ring bearers, I figured I’d offer my tips on how to make the pairing of toddlers and weddings a little easier for the Moms (and Dads) in charge! 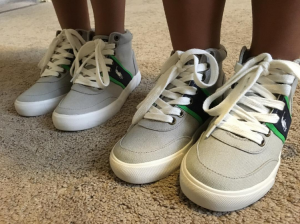 Wait to change them. We didn’t stay at the hotel where the wedding was taking place, but I knew better than to put them in their “fancy” clothes before we got to the venue. Kids will be kids, and in my case, boys will be boys. I held off as long as I could before putting them in their monkey suits.

Plan their attire. In our case(s), the brides pretty much gave me some input on what they wanted the boys to wear, but they left it to me to make the ultimate decision. In our more recent wedding, it was a bit more formal, so I chose to keep the boys in slacks, vest and (clip on) bow ties with canvas sneakers, as opposed to jacket and dress shoes.

Talk it out. A lot of times, we don’t think our kids are paying attention, but they can hear you loud and clear. How they choose to respond is an entirely different subject. I found it really helped to start talking about the event way before it ever happened. Prep them for what to expect and get them excited about what it will look like, who’s going to be there and how important their job is at the event. 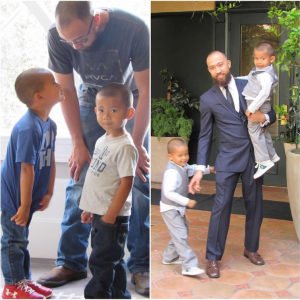 Practice makes perfect. Well, practice helps, but you can never really be sure how they will react when the spotlight is on them. However, talking over the “directions,” walking it through at the venue and going over it a few times should make a difference. Note — my guys were easy breezy at the rehearsal, but when all the flower petals were laid, the music was playing and the room was full, they got a bit overwhelmed.

Pack snacks. If you have a toddler, this is a given all the time, and a wedding is no exception. I only wished I had stashed a couple applesauce packets or some fruit snacks in my purse during the ceremony… But yeah, sometimes the wait between ceremony and dinner reception can be a little much for your munchkin, so be prepared. We actually had leftover pizza from lunch to hold them over and then after the ceremony made sure to get them some crackers and juice to hold them over.

Don’t be too serious. It’s a wedding, it’s a “grown up” event, but be careful not to put too much pressure on a toddler or yourself. Chances are if they are in a wedding at such a young age they are family or very close to the bride and groom, and they will understand. Now, one of mine will probably provide some of the soundtrack to my brother’s ceremony, as he was a little overcome by his duties, but it’ll be okay. 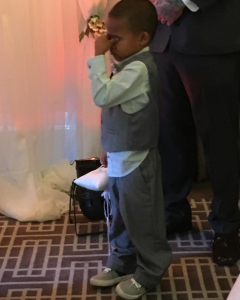 Be prepared for tears. Both of mine displayed a bit of waterworks at separate times during our last wedding event. One was embarrassed and let all his emotion go, while the other was caught off guard with the clapping and cheering when the bride was kissed and the new couple announced. So, have the tissue on tap because if you’re toddlers don’t need it, someone else in the crowd might.

Now, when it’s all said and done, have fun, let loose and take it out on the dance floor!